… and I’m not even going to ask to borrow your truck!

For one reason or another, I feel I need something of a clean break to move forward with my writing, my online work, and so forth.  So, I’ve started up a new blog at www.gregseitz.com.

I’ll still continue to post the occasional bit like I have here: trip reports, photos, “nature writing.” But I’ll also be posting about the intersections of my interests in nature, writing and books, film, art and more at the new site. I think if you’ve enjoyed this blog, you’ll probably enjoy the new one, too. Some recent posts at gregseitz.com have included:

For my RSS and e-mail subscribers, I’m going to work on seamlessly switching over the feeds so you don’t have to update anything, but I’m not making any promises. If you want to follow along, you should probably just subscribe to this feed for RSS or go here to sign up for e-mail updates.

I’ve been blogging at The Dharma Blog since October 2004. It’s been wonderful and I offer a sincere “thank you” to everyone who has followed along, contacted me via e-mail, commented on posts, and provided a lot of inspiration and motivation. I hope to see you over at my new home soon!

(I’ve also started experimenting with Twitter in earnest. If you’re into that sort of thing, you can follow me at twitter.com/gregseitz.) 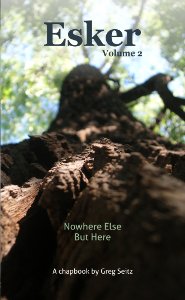 This new 90 page magazine-book hybrid, subtitled “Nowhere Else But Here,” is based on a project I undertook last June, writing every day for the whole month (one of Minnesota’s finest months).

For the project, I observed the progress and passing of June using the Japanese form haibun. That’s a fancy word for something that is simply, beautifully, the combination of prose and haiku poetry (you know, three lines of five, seven and five syllables, respectively).

In this collection, the prose tells of the journey through the season, and the haiku are images captured on that journey.

I think I’ve produced a high-quality publication and I’d love it if you’d buy a copy. I am hoping it would be good for your soul during these dark winter months to read these daily entries about days of sun and swimming in the river, nights of fireflies and driving home with your hand out the window in the cool, damp air. The tales find me traveling from Minneapolis to the St. Croix River, from the northern forests to simple morning walks around the lake.

In addition to the the 30 haibun, “Nowhere Else But Here” also features my photos on the front and back cover, both taken in June in the St. Croix River valley. And, as a bonus, there is a prologue to the chapbook that includes some of my favorite previous writings on summer in Minnesota.

You can get your own copy for just $12. Ordering online is quick, easy and safe. Thanks!

I try to keep my personal and professional life somewhat distinct, though the work I’ve been doing for the past 18 months has made such attempts feel a little silly at times, as the lines between my passions have blurred. Now, a project that has been consuming me, my colleagues and my organization since June is finally coming to fruition and I think some of my faithful readers here might be interested.

We have made a short film about the threats that new proposals for sulfide mines (copper, nickel and other metals that exist in sulfide ores) pose to the lakes and rivers of northeastern Minnesota, including the Boundary Waters Canoe Area Wilderness.

It has been a great treat to work with John Whitehead, an award-winning filmmaker with a real passion for conservation issues. He really dove into the issue, educated himself and made a powerful film. The message comes through with striking clarity that this is an important issue for all Minnesotans.

Without further ado, watch a trailer for “Precious Waters:”

You can come on out and see the whole thing at our premiere event this coming Wednesday, Nov. 11, at 7 p.m. in St. Paul:

I’ll be there (say ‘hi’ if you come!) and we’ll also have a panel discussion featuring several individuals featured in the film. I’m really excited about that part. 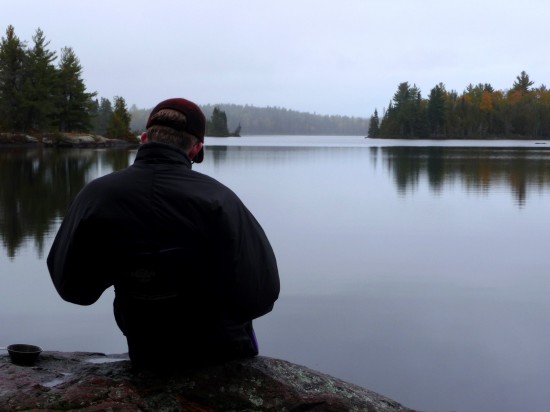 One night early this month I experienced a profound silence. I was on a lake in the Boundary Waters Canoe Area Wilderness; the air and Earth were wet from three days of rain though it was not currently doing so. The leaves were still on the trees but you could smell the damp decay of autumn. Despite this, the lake was as quiet or quieter than it would be in winter. Silence roared in my ears, as did my heart.

We first noticed the silence not longer after getting camp set up. It stopped us dead in our tracks. We stood on the rocks at water’s edge, awestruck. After a while, Gabe went fishing and Slim, Palmer and I stayed back at camp to read a bit, something we had not had the option of doing for the previous four days, and a favorite Boundary Waters activity for all of us. All-day rain and the long travel days such weather encouraged had meant I had only read a few pages by headlamp in the tent each night before sleep. Finally, this, the last night of the trip, an opportunity presented itself. I was starting the book I am finishing now, Jim Harrison’s astounding “The Road Home.” Yet, though I was hungry for the story, I could not help setting it down on my lap frequently, interrupted by the silence.

A flock of ducks, mergansers maybe, flew over just behind where we were sitting and I could hear each bird’s wings, or so it seemed. Later, as we sat around the fire after a filling dinner, somewhat stupefied, we or just me got up several times to go stand by the lake and get struck dumb by it all over again.

The stillness continued all that night and into the next morning when I got up. I was the first one out of the tent and felt cold and stiff, mentally as well as physically. I couldn’t do much besides put on almost all the clothes I had and wander around the camp. Down at the water’s edge, I heard a single duck flying over–just the wings through the air again–and when I looked up and across the lake for it, I saw that the duck was a good quarter-mile away.

Out on the lake the previous evening, the short autumn day already dwindling, Gabe would occasionally pass into and out of sight a half-mile or so down the lake. He said later that every bump of the paddle against gunwale, or any other noise he made, felt like a serious violation. I read a book about “nature’s generosity and fury” that told a tale of tragic love. When I read the last paragraph of the first part it felt like I got punched in the gut and I set the book down. I wished for such silence everyday. 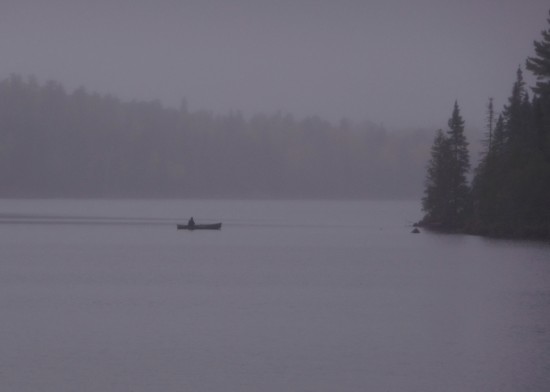 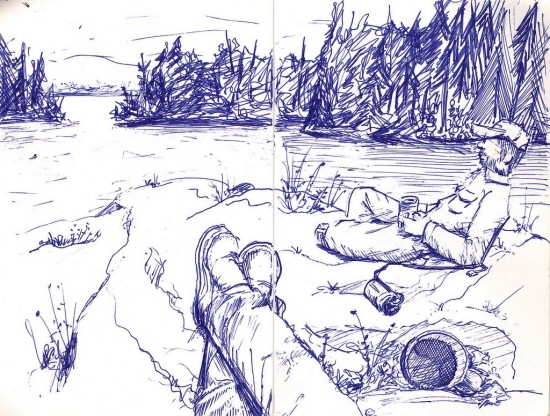 “Much praise had already been lavished upon the wonders of the islands of Matsushima. Yet if further praise is possible, I would like to say that here is the most beautiful spot in the whole country of Japan, and that the beauty of these islands is not in the least inferior to the beauty of Lake Dotei or Lake Seiko in China. The islands are situated in a bay about three miles wide in every direction and open to the sea through a narrow mouth on the south-east side. Just as the River Sekko in China is made full at each swell of the tide, so is this bay filled with the brimming water of the ocean, and innumerable islands are scattered over it from one end to the other. Tall islands point to the sky and level ones prostrate themselves before the surges of water. Islands are piled above islands, and islands are joined to islands, so that they look exactly like parents caressing their children or walking with them arm in arm. The pines are of the freshest green, and their branches are curved in exquisite lines, bent by the wind constantly blowing through them. Indeed, the beauty of the scene can only be compared to the most divinely endowed of feminine countenances, for who else could have created such beauty but the great god of nature himself? My pen strove in vain to equal this superb creation of divine artifice.

“Ojima Island where I landed was in reality a peninsula projecting far out into the sea. This was the place where the Priest Ungo had once retired, and the rock on which he used to sit for meditation was still there. I noticed a number of tiny cottages scattered among pine trees and pale blue threads of smoke rising from them. I wondered what kind of people were living in those isolated houses, and was approaching one of them with a strange sense of yearning, when, as if to interrupt me, the moon rose glittering over the darkened sea, completing the full transformation to a night-time scene. I lodged in an inn overlooking the bay, and went to bed in my upstairs room with all the windows open. As I lay there in the midst of the roaring wind and driving clouds, I felt myself to be in a world totally different from the one I was accustomed to. My companion Sora wrote:

Clear voiced cuckoo
Even you will need
The silver wings of a crane
To span the islands of Matsushima.”

- Matsuo Basho, The Narrow Road to the Deep North, translated by Noboyuki Yuasa 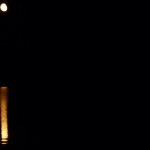 “The moon rose glittering over the darkened sea” 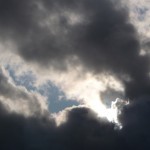 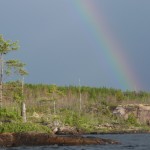 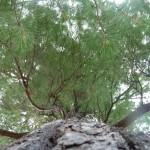 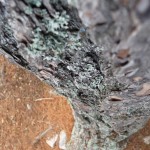 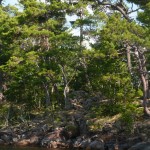 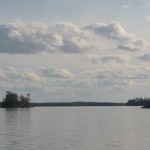 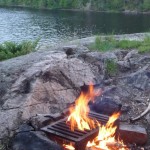 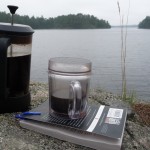 A pot of coffee, a book and a lake 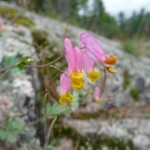 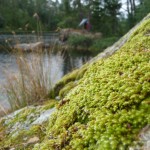 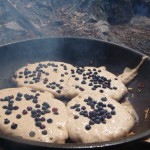 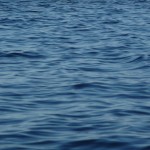 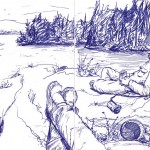 I wore jeans and a long-sleeved shirt when I walked Lola this morning. The skies and the lake were gray again and the air was cool. I realized that observations of weather are an insignificant way of marking the passage of seasons.

As summer settles in and reaches its apex around here with the Fourth of July, I become less interested in the details of its progression. But, in doing so, I believe I become more present and fully live in–if not obsessively appreciate–the moment.

This is the time when the lilies and lupines bloom, when the shy flowers on hostas start to show up. The geese and ducks in the area are all but invisible. They stay in their ponds, the juveniles almost indistinguishable from the adults, all of them feeding and resting.

The asparagus we put on the grill tonight was thick, its time is almost over. The ephemeral Hexes are probably done; Tricos should start to show up in the cool early mornings after hot days. The clouds of insects will writhe 100 feet above trout streams in the beams of first light.

Like any month, June is a transition. Nothing is permanent and we travel through each year via the seasons.

This I celebrate:
Water, memory, sunlight
Ache for it each day

“Esker: Tales of Woods and Water”

A chapbook I've published containing my writing alongside the work of some other talented folks.